What I am getting at is the matter of speaking accurately and being understood correctly. I am all the time reading or sometimes hearing others refer to a tadpole trike as a bike (or bicycle). Obviously that is quite incorrect. A bike has two wheels. A tadpole trike has 3 wheels as does any trike/tricycle. Bi/by means two and Tri means 3. That hasn’t changed. I understand that there are times when it is probably easier to simply refer to a trike as a bike/bicycle. I am talking about when we are speaking to others “in passing” (quickly mentioning something about our mode of transportation and then departing them or at least moving on to another subject). Very few people know what a tadpole trike is if we were to tell them we rode or are riding one to get there. I agree that if they really aren’t interested and there isn’t time or reason to go into detail it is simpler to just say bike/bicycle and let it go at that.

There are other times, however, that it would be much better to not use bike/bicycle when referring to a tadpole trike. I have a simple solution I use. I have a picture of my trike set as wallpaper on my cell phone screen which I can quickly and easily show others so they know what I am talking about if I say tadpole trike. And usually I hear back from them when they look at the picture … “oh yeah, I have seen those before” and everything is cleared up quickly. This picture below is not very good quality but it is of the screen of my cell phone showing the picture I am speaking of: 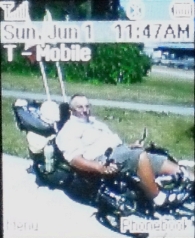 So saying bike/bicycle instead of tadpole trike is one of those things many are all too guilty of. I am continually seeing trikes advertised for sale where the ad reads “trike bike” or “trike bicycle”. My question is … which is it? Is it a trike or is it a bike? It can’t be both. Again “bi” means two and “tri” means three. When I am talking about my truck I don’t say “car truck” or “truck car”. That’s ridiculous, yet people say trike bicycle all the time.

Another common error we make is saying “recumbent trike” and leaving it at that. The problem with this is that there are three kinds of recumbent trikes … tadpole, delta, and what I would classify as bordering between a delta trike and a “Florida trike”.  Here is a picture of one:

I guess one could classify it as a delta trike but it most definitely is not in the same class as the ones like I am most familiar with. For those who don’t know what a delta trike is here is a picture of one: 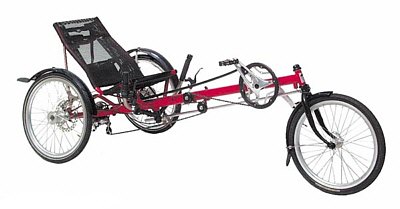