There is a lot of attention given and interest in motorized trikes but I am here to tell you that there are other options. One of them features FIDO … or whatever your dog/dog’s name is/are. Dogs need exercise and so do we humans. Here is a way to combine both dog, man and a tadpole trike.

The amount of exercise the dog gets would depend upon the dog, of course, And the same is true for the rider. The amount of exercise he/she would get would depend upon the dog/dogs. Some dogs are far better than others at providing propulsion. Some dogs love to pull while others almost need to be pulled. 🙂 The size and subsequent power of the dog comes into play too, of course. A small dog could be walked with a rig like this, but it stands to reason that such a dog won’t be able to help propel a trike and rider along. We are used to hearing HP (horsepower) to indicate the amount of power available. Here we are talking dog power. 🙂

In the picture above there is only one dog visible, but hey, the sky’s the limit … well, maybe not. You can have more than one dog hooked up … 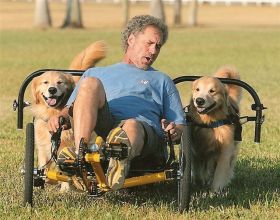 One of my pet peeves is dog owners who allow their dogs to be off leash and therefore out of the owner’s control. And nearly as bad is the matter of those who use the long leashes to where the dog if far away from the owner. Here where I live both are no no’s. It is against the law to allow a dog to be off leash and it is against the trail rules to use those long leashes. I have had several encounters with dogs who are off leash and I don’t appreciate it. You never know what is going to happen. I have had to slam on the brakes numerous times to keep from hitting a dog that runs or walks right in front of me. I have had dogs come charging right at me not knowing the outcome of such. It can be unnerving. And most dog owners who do these things have a serious attitude problem which comes across clearly if you dare say anything  to them.

I take my dog out walking on a short leash alongside of my trike. I keep him outboard of the right front wheel, but if there is traffic where this presents a problem I bring him back closer to me behind the front wheel. Of course, he is not a huge dog so this works okay for us.

Anyway, with this rig the dog/dogs are well under control making them safe as well as others. The only thing I have to say here is that one would need to be careful of the total width and the width of the trail one is riding on as anything less than a 10 foot wide trail two dogs wide would be the maximum width. Even on a ten foot wide trail the lane would be filled pretty much to maximum. The three and 4 dogs abreast would be way too wide to safely and lawfully go down a trail. Not only is the safety and well being of others a concern, but it is also true of the dogs. I would not want to see them get injured because they stick out too far on a trail too narrow to accommodate them. And one would have to be careful how close he got to the edge of the trail, especially if there is a fence, wall, weeds, tree limbs, etc. they could get into. With the rig sticking out quite a bit further than the trike itself the rider would need to be extra careful. The dog could get injured and it is quite possible that the trike would be turned that direction and into whatever is there.

I know that there are many who “spurn the law”. Obeying the trail rules means nothing to them. I deal with it everyday. If you are such a person then what I am writing here probably offends or even angers you. What can I say? Such lawlessness is prophesied in God’s Word as part of the End Times we are now living in.

Here are some videos …

There are other manufacturers of dog powered products. Here is a video featuring one of them:

As you can see with 3 dogs it is still too wide. Two dogs with this setup would be okay as far as the width issue.