Cold Weld? What kind of nonsense is that? Most everybody knows welding produces lots of heat. Yet there really is something to those words. Actually there is more than one definition for those words, but I am only addressing one of them. As a highly certified weldor myself with over 50 years of experience I know what a cold weld is. I have seen it all too many times and it is never something I like seeing. These are results of “cold welds” **: 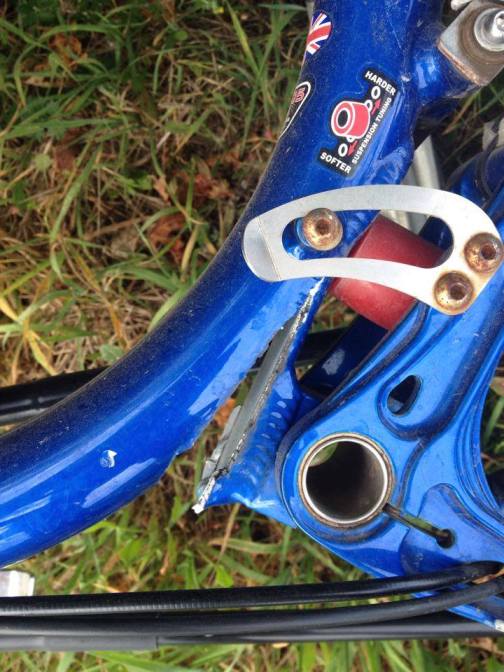 ** I want to qualify that … as I also think it is the result of insufficient welding on these areas.

Prior to the failure of these welds most people would say that they looked fine … like they were a good and proper weld. However looks can be deceiving. That is why it is important that the person performing the welding is experienced and knows what they are doing … and is paying attention to the weld they are performing. In short, a cold weld results when there is a lack of penetration and fusion into the base (or parent) metal. When welding a thin metal to a thick metal things get a bit more complicated. Again, it comes down to the knowledge, understanding and experience of the weldor. Many weldors may be able to produce a good looking weld, but that may be all that it is. The best way I could describe it is it’s like putting a band aid or piece of tape over the area being welded. On the surface it looks fine, but down underneath there is a problem. I am a “Navy weldor” and I firmly believe in using as high of a welding current as the weldor (the person doing the welding) can handle within the heat range of the welding rod and what the parent metal can handle. Of course, I am talking here of manual arc welding using welding electrodes. Our trikes are welded up using a TIG (tungsten inert gas) (otherwise known as heli-arc) welding process. Still the same principal applies. I am not going to elaborate on the matter of welding as I would imagine most readers are not much interested in getting deeper into it. I just want people to know that welds do fail when they are not properly done.

Just a personal note here … I have a lifetime of welding behind me and am most happy to say that I very rarely have had welds I have performed fail. If fact, I once was hired along with several other weldors to work on a large job putting back together a gravel separator machine which had been torch cut apart in order to transport it from one gravel pit to another many miles apart. It needed to be completed as quickly as possible. Initially I was the first and only weldor hired, but when it became apparent that it was way too big of a job for one weldor to accomplish in the time frame the gravel pit owner had in mind he called in several other weldors to work on it. The man who hired us was himself a weldor. He observed all of us and knew what and where each of us had welded on this gravel separator which vibrated violently truly testing the quality of the welds. Upon completion of the job and using the machine many of the welds started breaking. I was the only weldor he called back to repair weld on it as he witnessed that I was the only weldor whose welds had not failed. Anyway, HERE is an article on the subject of weld failure for anyone interested in reading more about it.

HERE is the BentRiderOnline message board where a discussion of the weld failure of an HP Velotechnik Scorpion frame is being discussed.

I am going to go out on a proverbial limb here and say something which some probably won’t agree with and won’t like. Some times the design of products is as much to blame as anything. In both of the pictures I have shown as examples of weld failure these areas on the trikes have extreme stress placed on them. And sometimes weld failure is going to happen as a result. That being said, if the weld was done right usually it is not the weld itself that fails. Often it is the metal right beside of the weld that fails. Or it can be a combination of both. Looking at both of these pictures I would say that neither of these trikes had a sufficient amount of welding done to begin with. If I were doing the welding on them I would have welded more on them than what was done. I say that knowing that on both of these trikes those areas will have a lot of stress placed on them and the welds need to be quite strong if they are going to hold up to what is being demanded of them.

I myself experienced weld failure on my 2009 Catrike Trail. It developed a “hair line crack” along the edge of a weld on the back underside of the crossmember. I spotted it one time when I had my trike tipped up on it’s side for some other work I was performing on it.

Trike manufacturers warrant their trike frames for varying lengths of time. Only a small handful of companies offer a lifetime warranty on the frame. Catrike used to be among them, but now they only offer a limited time warranty. I wrote an article on frame warranties awhile back.

Weld failure is going to happen, but there are things that can be done to improve the chances of it not happening. I would highly recommend to all trike owners to periodically visually inspect the weld joints of their trikes to be sure none are in the process of failing. I caught mine before it did. There is no way to tell what would have happened if I hadn’t noticed it and just kept riding it with the hair line crack. It could have lasted for years like that, but it also could have gotten much worse and even resulted in a major failure. Such failure can definitely not only ruin our day, but likely it will ruin a whole lot of our days and prevent us from …

One thought on “COLD WELD=WELD FAILURE”