Another velomobile is trying to make it to market. The Ginzvelo it an interesting design.

It uses the ICE Adventure trike. This is classified as a Human Electric Hybrid (HED) and, of course, is also classified as a bicycle as far as where it can be ridden and parked. At the time of this posting the Ginzvelo is in a kickstarter program.

If I understand correctly at present during the kickstarter campaign there are two options currently being offered as far as “models”:

Sparten model for $3900 includes: The Atrix Shell, Headlights, Tailights, Turn Signals, Storage Net and free shipping to the lower 48 states. (note: does not include the trike, electric motor or battery)

Ginzvelo model for $6900 includes: A complete Ginzvelo with the Atrix body, ICE Adventure chassis, Headlights, Tail lights, Turn signals, 500watt E-Bikes kit, 20 AH Allcell battery, storage net and included shipping to the lower 48 states. After the kickstarter program ends the price is expected to go up to just under $10,000.

It has a 500 watt motor in the rear wheel hub. Using this size motor instead of the larger 750 watt does help to extend the distance one can travel on a single battery charge. 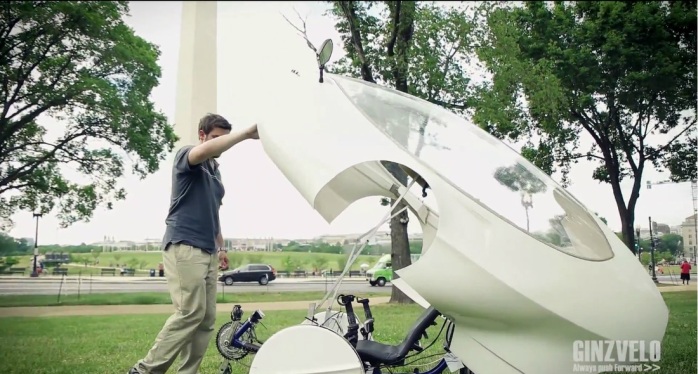 This velomobile weighs only 85 pounds … not bad considering all that one sees which is extra beyond what a basic tadpole trike weighs. The monstrous HP Velotechnik Scorpion FS 26 with electric motor pedal assist weighs just over 68 pounds … twice what my Catrike Trail weighs. And it is just a plain tadpole trike, not a velomobile. So 85 pounds is pretty light considering it has the velomobile body on it. 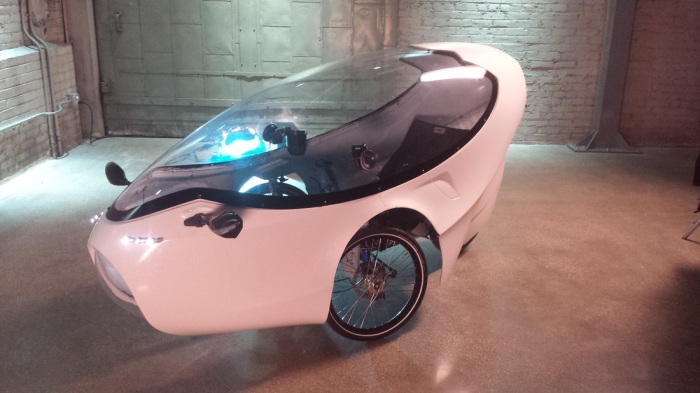 The use of an ICE trike would not be my choice as I don’t care for the indirect steering (doesn’t turn sharp enough) nor the seat (too small). I would have much rather they offer it using a Catrike which has direct steering and a larger seat. I have ridden with ICE trikes and often they could not make the turns I made with ease. They had to stop and back up, go forward, stop, back up, go forward … just to get around the turn we were making. That is ridiculous! There is no excuse for such engineering design.

Ginzvelo reports that the velomobile has no suspension. If suspension is desired it must be ordered from ICE for an additional cost ($600 for rear suspension & $1200 for full suspension). One can buy a brand new car for the kind of money we talking here.

For an additional $200 the Ginzvelo can be outfitted with blue and green gel paint that glow in the dark to increase visibility at night. [Also looks really cool] Other more unique aesthetics are considered carefully on a case by case basis for marketing purposes. 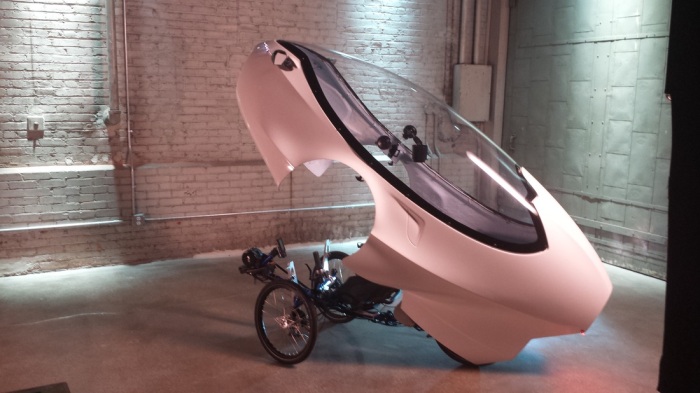 Notice in the picture below that the opening in the front is missing. According to the question and answer page on their website it has been changed in the current design. All the air flow comes in from under the body. It still exits the same out the back behind the rider’s head.

Who knows, maybe someday we will see lots of velomobiles running around instead of so many cars. They are kinda cute!

Update (2/4/2016) — I just checked their WEBSITE and saw that they are selling their product now.

NOTE: DUE TO BACKLOG OF ORDERS, DELIVERY IS CURRENTLY DELAYED BY 65 DAYS

4 thoughts on “GINZVELO – A NEW DESIGN IN VELOMOBILES”