Did you know that trail rules don’t apply? That sure seems to be the attitude and position many take. I find this especially true among bicyclists. I would estimate that about 85 % of bicyclists do not obey the trail rules such as giving a warning they are passing other trail users. They obviously don’t believe the trail rules apply to them. Then there are those on foot who pay no attention to the instruction to stay to the right  except when passing. Many meander all over the place (paying no attention to others on the trail) making it impossible for other trail users to get by them without them getting over out of the way. Other trail users walk abreast of each other and take up the whole width of the trail. Many trail users have earbuds in their ears and can’t hear anything other than what they are listening to. The trail rules don’t apply to them either. Then there are dog owners … oh … they are something else. The trail rules (not to mention the state law where I live) require them to keep their dogs on a short leash under their control. But ol’ Fido gets to run free and just do whatever he wants including attacking cyclists and walking or running right out in front of them causing them to wreck. Definitely there are a whole lot of dog owners who don’t think the trail rules apply to them. One of my really big pet peeves is when they allow their dogs to poop right on the trail and then just walk away and leave it there. Now I don’t blame the dog, but I sure do blame them. What kind of a person would do such a thing? I would like to take a hold of them and shove their face right down in that pile of poop. Yeah, that is what I would like to do.

I find some folks have some very interesting attitudes and thinking about trail rules. Recently one person stated that the rules are “archaic” and senseless. That would be laughable if they weren’t serious. I believe most people would disagree with such a notion regarding trail rules … saying just the opposite. Rules are very much needed. People being rebellious by nature and “unrestrained” will self destruct and do major damage in society. So I say to anyone who thinks the rules don’t apply to them and are stupid or senseless you are guilty of “stinkin’ thinkin’ ” and are seriously in need of an attitude adjustment. 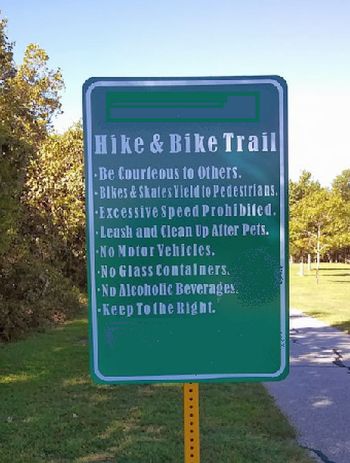 There is nothing archaic or senseless about trail rules. They exist for very good reason. And none of us are exempt from them. God has commanded us to obey those in authority over us as long as man’s laws don’t violate His laws and commandments to us.

Just as I started writing this article I received an email from our local trails authority which included a list of the trail rules. Here is a portion of the email …

“Below are some fundamental rules that will help keep everyone safe:

+Walk and Roll on the Right. Pass on the Left.
+Use Bell or Voice When Passing. Slow down, allow the trail user to react and then pass the person on the left.
+Don’t Tune Out. Music is a great way to pass the miles but make sure you can still hear. Leave an ear bud out or keep your music low enough to hear other trail users.
+Use Caution on Blind Corners. When encountering a blind corner, slow down, stay right and use your bell or voice to say that you are proceeding. +Never pass on a blind corner or hill.
+Doggone it, Mind Your Pets. Keep your pet leashed and be sure to clean up after it. Dispose of the waste in a receptacle. Never, ever litter.”

They all make perfect sense to me … nothing archaic about them. The only thing I will say is concerning the “on your left”  announcement I think needs some improvement as it can be confusing to some people. I usually say “coming up behind you and will be passing on your left side”. Of course, many trail users have earbuds in their ears and don’t hear anything I say even though I say it loudly. Some people are on the left side of the trail so it isn’t possible to pass them on the left. If people would just obey the rules it would make everything so much better. We need to read and heed. One way or the other let’s all just try to get along out on the trails and …