I grew up learning how to steer in a skid/slide … first on a bicycle, then a motorcycle and finally a car. As a kid my dad taught me how to steer a car in a skid. When I say taught I mean he showed me how to do it. At 16 years old I can remember driving my parents’ car down the city street purposely placing the car into a skid sideways between parked cars along the sides of the street and controlling the skid as I drove past them.

A few years later while in the navy I drove a ’63 Corvette on a particular curvy road south of San Diego, CA where there was a sheer drop off along the edge and very rough cliff like terrain below and nothing along the sides of the road to keep a vehicle from going off over the edge. I would put the Corvette into a controlled skid in the curves as I sped around them. Yes, it was foolish and dangerous as it could have very easily and quickly resulted like what is pictured above. I wouldn’t not do any of this today, but as a teenager and into my early 20s I thought nothing of it. I am saying all of this to say that learning how to control a skid or slide can save your butt should you find yourself in such a predicament.

I find in riding a tadpole trike on a slippery surface such as snow or ice the trike can all by itself sometimes seem to go into a sideways slide. Without taking proper needed action when this happens it could result in an unwanted unexpected disaster. For me it just comes natural to turn the handlebars and steer out of the skid. It is “second nature” as they say. I find it fun and challenging. Many times I have purposely put my trike into slides just to steer out of them. 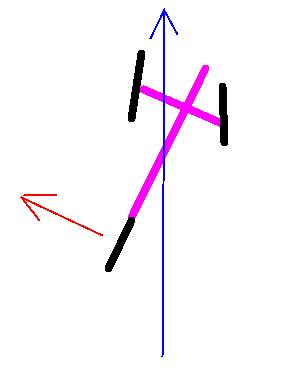 As illustrated in the drawing above when the rear wheel of a trike slides sideways you should steer in the same direction you are sliding to control the skid. As the trike straightens back out you should turn the front wheels back straight. Learning how far to turn the front wheels and for how long is crucial to successfully controlling a skid. You can also over compensate and make matters worse. If you fail to straighten the wheels back around at the right time you can cause the vehicle to skid the opposite direction. It is best to practice all of this in an empty parking lot where there is plenty of room to slide around without concern of hitting anything.

This video shows the rider steering in a skid. Notice at the very end when he tips over it is the result of the trike going from the slippery surface onto dry pavement and the tire “caught” suddenly and caused the trike to tip over.

The best advice I could give anyone to learn how to steer out of a skid is as I stated previously … to practice in an empty parking lot where you have plenty of room around you. Of course, I am talking about riding on a slippery surface such as snow or ice. I would also caution you not to try this if the slippery surface is not continuous. What I mean by that is that the snow or ice needs to cover the entirety of the area where you are riding. You don’t want to be sliding sideways and then suddenly hit dry pavement (like the rider in the video above) as that could be very dangerous resulting in a bad sudden tip over … a violent one where you could easily get injured. Even if you don’t normally ride in such conditions it would be good to learn this skill so you know what to do if it ever happens to you when you do ride. You could find yourself riding on a surface where there is loose dirt or gravel or a wet spot suddenly come up where the rear wheel starts to slide sideways. Again, I caution you about the rear wheel sliding sideways and then suddenly hitting dry pavement as the trike is likely to tip over suddenly. I can’t over emphasize this.

Riding over uneven surfaces can cause a trike to go into a skid/slide … especially if you are already in a turn (going around a curve).

Even riding on some surfaces like in the image above can be hazardous. This was on dirt and probably loose dirt at that. The rider knew to steer with the slide to try to control it and recover from it. Most of the time this works, but sometimes things just go wrong and the end result is not what was expected or wanted.  This person tipped over. Fortunately they were not injured. I personally think the reason they tipped over is because the rear wheel slid into a stone or something causing the slide to end and tipping the trike over suddenly. Just going over uneven ground can cause it. It doesn’t take much sometimes to cause such a scenario. It is also noted in the video that she could not maneuver as she would have liked to because of a cactus plant sticking out in her path. That in and of itself could produce the results she experienced.

Here is the video which goes with the picture above:

The rider is most fortunate that the rollover didn’t result in serious injury. She went right onto large stones.

Sliding sideways can be fun as long as you can safely control it, but it can also be extremely dangerous when things go wrong. Be careful out there. Do your best to keep it upright and …

2 thoughts on “STEERING IN A SKID”