I rather imagine some of the readers of this blog are wondering what all is going on as far as my not posting much on it anymore. I had mentioned previously that I just feel more less drained and in need of getting away from it. That is quite true, but there is another factor which weighs in and all by itself has put the brakes on. My vision has become quite poor and so it is quite difficult for me to do much work at the computer. I had a stroke occur in my only good eye and it has really dealt me a blow. Previously many years ago I had a stroke occur in my left eye which left me legally blind in the left eye. There was no medical treatment for this at that time. A few years later there was  so when it happened to my right eye I have been getting treatment since. That being said, things have not been going well and slowly it has worsened. Spending much time at a computer is hard on good eyes, but it is even harder on bad eyes.

As many of you know I also had a Facebook Group called Tadpole Rider Group. I was more less consumed by it spending most of my life involved with it. It was totally out of control and was really taking its toll on me. I had to make the hard choice to close it. Unfortunately something went very wrong and it didn’t totally get deleted.  I spent many hours painstakingly going thru all that Facebook required to close it only to have some fluke take place and leave it up to be seen (what there is left of it). I can’t do anything about it as I don’t have access to any of it any more. It is just in limbo … stuck right where it is at appearing  just as it does. I have attempted to get Facebook to delete it, but that is a near impossibility … trying to contact Facebook that is. Everything I have tried has been in vain. In short, Facebook is really one screwed up entity.

I still have the desire from time to time to post something more here on this blog, but I find it just too challenging most of the time to even attempt it. I don’t know what the future holds as far as my eyesight. I don’t know if it will get better, stay the same or get worse. There is a posting I want to do right now, but I don’t know if I will be able to. Time will tell. Again, I want to thank all the loyal readers of this blog. I am sorry things have come to this. It has been a drastic life change for me and is something I struggle with to accept and deal with.

At least for now I am still able to ride my trike. Spring arrived yesterday on the calendar anyway. I am hoping the weather shapes up soon and indicates it is aware of it.

Here is a rather poor quality image of my trike with the eZee hub motor conversion kit installed. 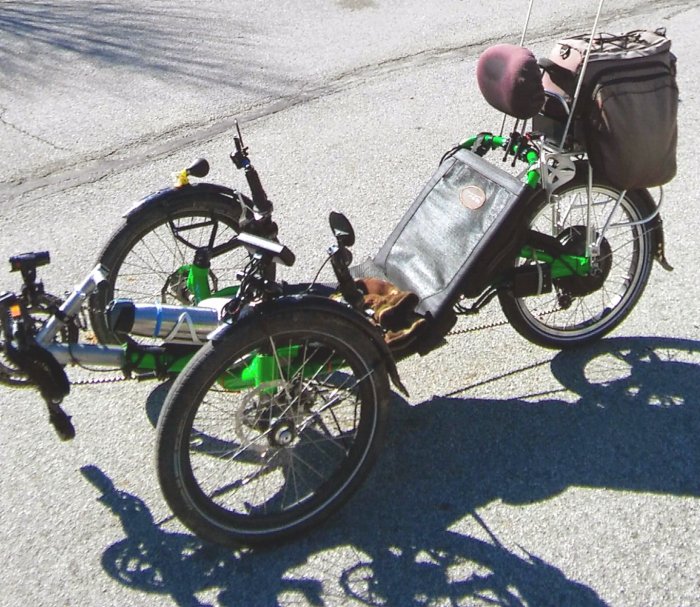 I am really enjoying it although I am a bit disappointed with the amount of torque it has. It is a geared type motor which is suppose to be more torquie than direct drive gearless motors. However, it doesn’t seem to have as much torque as the direct drive motors I have had. Never the less I am liking it quite well thus far and have no regrets about buying it as of yet. It is rated at 1000 watts while the BionX motors I had were rated at 350 watts. The first BionX motor I had definitely had more hill climbing ability than this eZee motor has. It would shoot me up a hill just by itself while this motor only assists my pedaling and would do rather poorly on a steep hill or a long incline.

Well, that is my story and I seem to be stuck with it … at least for now.