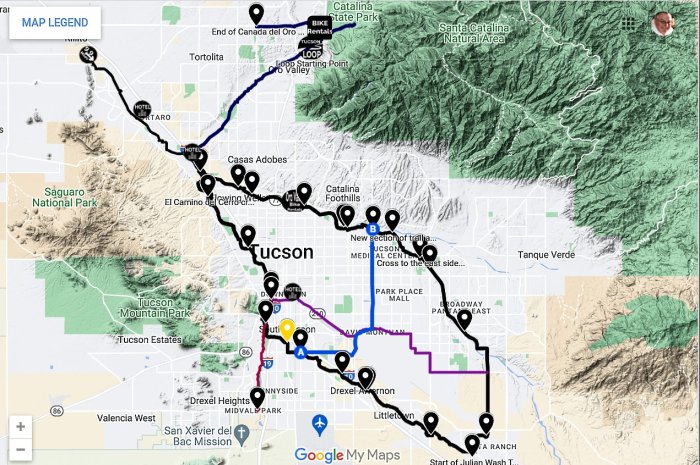 Several times others have recommended snowbirding to Tucson, Arizona rather than Florida. Quite honestly there is nothing about most of the western states that appeal to me. When I look at the western half of Texas I can’t help but wonder why we fought Mexico for it. It is just miles and miles of nothing but wasteland in my opinion. Mexico ended up more less possessing it anyway and without firing a shot. The states of Arizona and New Mexico also have no appeal to me … just more wasteland. Tucson as a city has no appeal to me. But then I don’t like cities at all. I am a “small town boy”. That being said I am somewhat impressed with The Loop. At 130 or more miles long that is a lot of trail to ride. Of course, it is riding in the dessert … something which probably would not appeal to some of us, including me.  I just looked at their weather forecast. It is a little cooler than I thought it would be and their daily highs are different than what I expected for December. Here in Indiana where I live it gets colder as the winter months pass. December can be a mixed bag of offerings … from the 60s down into the teens. January is usually the coldest month and by March it is usually starting to warm up a little bit with the emphasis on a little bit. In Tucson December is in the 60s for highs and starting in January each month it gets a little bit warmer. By the end of March it is up into the low 80s so for me that would be my cut off point for snowbirding. I don’t like heat and low 80s is as warm as I care for. I could handle all those temperatures from Dec thru Mar. I doubt very much if I will ever get to travel to Tucson and ride The Loop but maybe you might. They have expanded it some already and have plans to expand it more.

PLEASE NOTE — I JUST HEARD THAT E-BIKES ARE NOT ALLOWED ON THE LOOP. THAT IS RIDICULOUS!

Click HERE to order the book about The Loop mentioned in the video above.

The sound is lousy in this next video but it shows e-bikes riding on The Loop. At 3 min. 40 seconds into the video there is something I always like to see …

Online maps are available with various information about the trail system.

And here is a very long video of a bike ride on the loop where a bicyclists rides about 16 miles or so one way to get to Flowing Wells.

After watching the video above I can see that The Loop is not as appealing to me as I thought it would be. It looks to be very boring to ride. There is very little shade and the scenery really sucks in my opinion. And there looks to be a lot of it which runs right next to busy roads and trail users have to cross these roads. I would not care for that. They do have the trail considerably closed off to any unwanted traffic being able to get onto it. It is fenced in. I would feel quite trapped if I were on the trail as there are very few places where one could get off of the trail. I don’t know what they have for restroom facilities but I didn’t see any in the video. According to THIS there are lots of restrooms available all along the trail.

Floral City, Florida and the Withlacoochee State Trail is looking more appealing all the time. It is partly cloudy and 79 there right now and only 56 in Tucson. And it is raining in Tucson. I would expect that in Florida but not Arizona. But alas, I am stuck here in Indiana with little hope of going anywhere to escape winter. I am hoping we will have an unusually mild winter with above average temperatures and very little precipitation … rain or snow. Now I could handle that. It would help me to …