Most of us know that this PLANdemic (not pandemic) has made a big mess of lots of things in life. Bike shops are struggling to get bicycles, trikes and all sorts of accessories delivered in a timely fashion once ordered. I was in my local Catrike dealer the other day. They not only don’t have any Catrikes available to display but because they don’t and because it will be awhile before anymore come in they removed the display racks. They have several different models on order but it will be a long time before any arrive. So as frustrating and aggravating as all this is it all comes down to practicing patience … as hard as that is to do. It helps to have a trike to ride while waiting on a new one to come in. Such is the case for David. He is waiting on a new trike he ordered.

Face it, there is simply wisdom in trying as many trikes out before purchasing one. They are not cheap to buy and once they leave the store their value usually drops off considerably. Some dealers will work with customers if they are dissatisfied with their purchase but there is no guarantee of that. It can be risky business to buy a trike you end up regretting and facing the aftermath. So common sense dictates that we do our homework or should I say leg work (actually both) and go check trikes out riding as many as you can and if possible any you find yourself interested in taking a much longer ride on them as it may help you discover something that wasn’t noticed on a short ride. I don’t know how many dealers there are around which are willing to do this, especially if they don’t have easy ready access to someplace customers could ride from their store and be gone for an extended ride. I don’t know what their policies are as far as requiring a security deposit to take a trike out for an extended ride. That reminds me of a true story of a business neighbor I once had. I had a welding shop and he had an automotive transmission repair business. A guy came into his place of business asking to borrow a log chain. The business owner told him it would require a security deposit. The guy told the business owner if I had that much money I would just buy one. The business owner told him that if he didn’t bring the chain back he did just buy one. I fully agree with the business owner in his practice of requiring a security deposit of a sufficient amount to cover replacing the chain. So I don’t know if any trike dealers require a security deposit to cover the cost of the trike but I can’t say as I blame them if they do. Anyway, good hunting and may you find the trike that is just right for you. 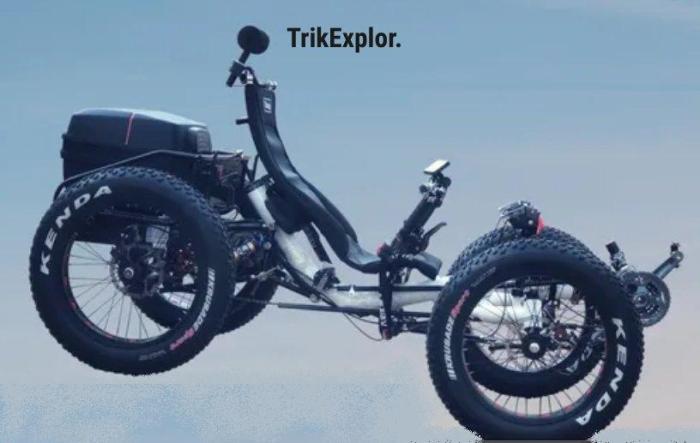 I have written about one or more of the trikes/quads offered by this company before but as time goes by they keep coming out with more offerings. They always look interesting. I won’t elaborate on them as I really don’t know much about them as far as their quality and customer service.

Chinese made trikes have, of course, been around for awhile. And they are known for low cost. Again, I have written about them previously. And HERE is another past posting on them.

TrikExplor is a Chinese company which is something which personally bothers me as I don’t believe we as Americans should be buying all the products we do from China. In doing so we build them up while greatly damaging our own country. Besides that they are a Communist country and I think it is morally wrong for us to do business with them. Please understand I have nothing against the people of China. It is the Chinese government I have an issue with. Furthermore the Chinese are well known for totally ignoring the law and manufacturing copies of well known products selling them at a much lower price.

I truly wish we had such products being offered right here in our own country … made in the U.S.A. … and at a competitive price. I suppose however that the market is lacking for that to happen. Even some of these Chinese offerings are quite expensive … over $7000.

Right now as far as I know such products are not being offered here in the U.S. with the exception of certain offerings from Utah Trikes. I guess only time will tell as to whether or not these somewhat special trikes and quads will catch on and be sold in sufficient numbers for other manufacturers to offer them.

Whatever we choose to ride may we all …

* FOR IMMEDIATE RELEASE* I am pleased to announce that *TRIKE ADVENTURES *located on Vancouver Island, BC Canada has been awarded a Trident Trikes Dealership. Our Business Model is designed to give Customers & Prospective Buyers the opportunity to spend a half or full day exploring our Central Vancouver Island area using one of Trident’s Trike Models. Using ‘On the Road’ Experience to showcase Trident’s offerings should allow new owners to find a model that best suits their needs. We are in the process of setting up our 2017 Tours & so far have the following:

Each Tour is 4-5 hours in duration & about 30 kms or less in length. They are designed for Beginner Trikers. Longer overnight trips are in the planning stages & will prove to be popular with more experienced Trikers.

Should you wish to be notified of tour start dates or be on our mailing list please visit: http://midislandtrikeadventures.weebly.com/

I just want to call your attention to a new page I have added to this blog. It is “TRIKE DEALERS” and on it you will find various trike dealers listed and what brand of trikes they sell. You will find a button for it among the others in the header of this blog. I have started it off listing a few dealers in northern Indiana where I live. I am not about to take the time and go to all the hard work of looking up dealers all over the nation to list here. However if you are a trike dealer or if you want to list a trike dealer on this page just email me (tadpolerider2 at gmail dot com) with all the information and I will gladly list it. Please include all pertinent information such as name of business, complete address, phone number, email address, website, Facebook page, business hours, and what brand(s) are sold.