I bought my Catrike Trail new back in 2009. Now, some 12 years later I have over 96,000 miles on it. And I am elated to be able to report that it is  like new as far as mechanically. I would not be afraid to start off on a world tour on it just as it is. So I don’t mid tooting their horn. They make an excellent product.

That does not mean that there isn’t room for improvement. I have had problems with their wheels not holding up to what they go thru here where I live and ride. Between bad pot holes and bumps all three of the Catrike wheels have been destroyed. I replaced them with more Catrike wheels only to have them destroyed even quicker than the original ones. So I stopped buying the Catrike wheels and bought some heavy duty BMX rims and had my local bike shop lace my hubs into them. The BMX wheels have held up great and I no longer have spoke breakage problems like I did with the Catrike wheels.

Other than the wheels I can’t say that I have had any other issues which come to mind. Of course, I have experienced the usual … various components wearing out such as tires, wheel and headset bearings, brake pad and rotors, shifters, derailleurs, chains and sprockets wearing out, etc. Even so most of these have lasted incredibly long … far beyond their expected life.

About 4 years after buying my 2009 model I discovered a hairline crack alongside of the weld on the bottom side of the crossmember. I am a highly experienced and accomplished weldor so I knew what I was up against. The weld could fail anytime or it could last for many years. Catrike warranted the frame so I contacted them about it sending them pictures to show them what I was talking about. 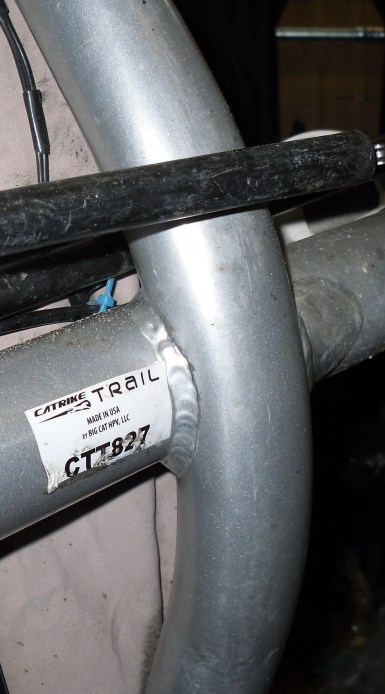 In my opinion I think they should also have placed a gusset on that side like they did the other side.

Anyway, they replaced the frame under warranty. However, they no longer offered the space frame like my 2009 model had. They sent their new frame which was a 2013 model. I don’t like the new frame and ever since I got it I have wondered if I should have taken my chances on that weld and kept the 2009 frame. Too late now. 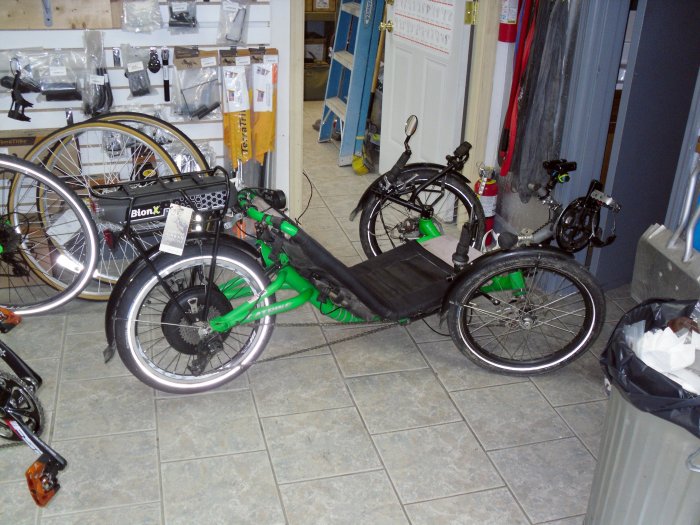 I am sold on Catrike. I don’t think there is a better tadpole trike made regardless of the cost. And I don’t think there is a better engineered tadpole trike. There is one competitor which I won’t name other than to say they claim to have inspired engineering. Their trikes are quite expensive but in my opinion Catrike is much better engineered and built. I would not trade my one Catrike for three of their models of my choice unless I would be allowed to sell them and buy what I want.

Thru the years I have made changes adding and removing various stuff. Here is a picture of my trike with a canopy I had just installed on it. I also have a hub motor in the rear wheel and two batteries. 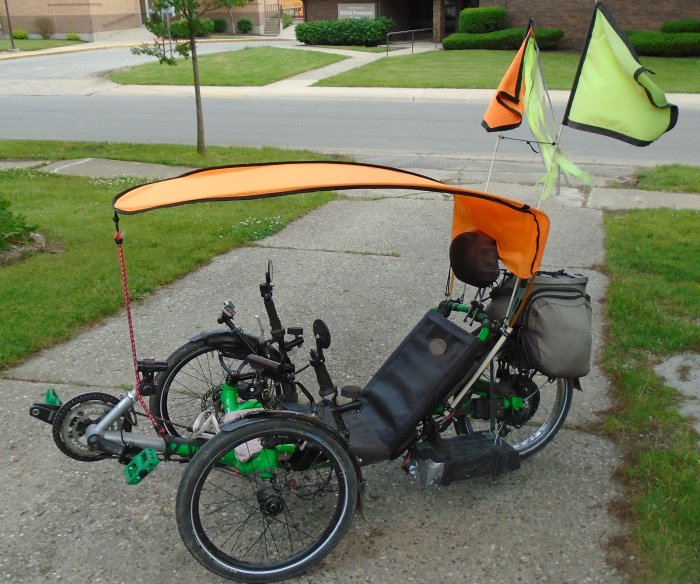 I have never owned any brand than Catrike but I have ridden a few other brands. It is a clear choice for me.  Now if I could just figure out what they were thinking when they name it. I am referring to the spelling. I know it is pronounced CAT TRIKE, but it sure isn’t spelled that way. CAT RIKE … CA TRIKE. Several times I have seen people spell it CATTRIKE. I wonder why Catrike didn’t do that. But no, they spelled it ….

… just to mess with our minds, me thinks. Hey, whatever you ride and whether you can spell it or not …

Some people impose while others simply pose. Here is one more reason I like our Vice President …. that is a Catrike he is sitting (posing) on … I wish I could just post the picture here, but I don’t have permission so I will simply link to it …

I wish I knew more about this photo and what was going on. I wonder if he rode it and, if so, what he thought of it. It would be neat if he would get “hooked” on tadpole trikes and get one of his own to ride. There is no reason why a Vice President couldn’t …

ENJOY THE RIDE TOO!

I came across a video where all the different models of Catrike tadpole trikes are shown and described. I was impressed with it so I thought I would share it here. Please be aware that since this video was produced Catrike has come out with two more models, the 550 and the Dumont.

I reckon there are all sorts of things a person could possibly lust over. And I reckon that many of us have our favorite brand of whatever product we might talk about. I will readily admit that of all the brands of tadpole trikes that exist I have my favorite. Here is a hint … “here kitty, kitty”. I think I can safely say that I don’t lust over it. I am very fond of it however. There are several quality trikes on the market and Catrike is among the best of them. The person who made this video apparently agrees …

I ride a Catrike Trail recumbent tadpole trike and take a considerable interest in tadpole trikes. Here is a picture of me sitting on my trike … 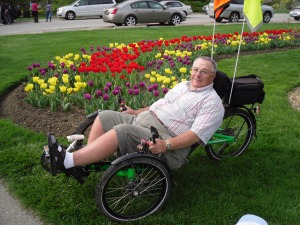 I just stumbled across a YouTube video which I thought I would share here. It is of a few Catrike riders out for a ride down in Florida. Tadpole trikes are a lot of fun to ride and extremely comfortable. Since they sit so low to the ground they handle great. Some compare riding one to driving a go cart or sports car. I would not go so far as to say that, but they do handle great. Catrike tadpole trikes are manufactured in Orlando, Florida.

Every year Catrike sponsors a rally for Catrike owners. I would love to go and participate in it. It is open to everyone regardless of what brand of trike or even bicycle they ride. Here are some videos of the 2014 rally. They show many trikes  up close as they are gathering to go for a group ride on one of the local trails near Orlando. They also show the many trikes and bikes riding on the trail.

And here is another video of the 2014 rally. This one is considerably longer but well made and interesting …

In addition to the organized and unorganized rides there is also a factory tour available. Being a retired weldor/fabricator taking such a tour would greatly interest me. I built my own recumbent bicycle and tadpole trike before buying factory made ones. Here are pictures of both: 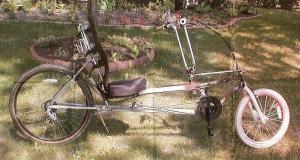 I never got the bike painted as I ended up cutting it up to use some of the parts to make the tadpole trike.

There is also an annual Catrike rally held in Austin, Texas . And there are a few other rallies held in various locations for other brands or for all brands. One is held in Oregon which is for “recumbents” … both bikes and trikes.

Tadpole trikes are also known as reverse trikes since there are two wheels in the front and one wheel in the back. This makes for a more stable design. Although they are becoming more and more popular and sales are up considerably they are still not all that common in many places so when people see them they often don’t know what they are seeing and show an interest in them. Certainly many people comment about how neat they are and that they really like them. Lots of questions are asked about them as people know and understand very little about them. A few of the most asked questions are:

“Is that comfortable to ride?”

“How much do they cost?”

I highly recommend Catrike as I think they are one of the best made and designed tadpole trikes available and they are the only** brand name trike totally made in the U.S. Most come from China/Taiwan. Some come from England, Germany, and a couple of other European countries and from Australia.