“They” say we are having a drought here in northern Indiana where I live. If we are I think it is safe to say that it has come to an end. It is raining hard and the forecast if for it to continue to rain …  for the rest of the week.  Boo Hoo!  So it doesn’t look like trike riding is going to happen. Oh well, I will just have to figure out something else to do. Maybe I could and should build a boat. It is looking and sounding like I might need one. It is really coming down hard out there. I know we need the rain. If nothing else the farmers’ crops need the rain. I just hope they don’t get too much.

With all of this rain the rivers are sure to flood and most of the trails I normally ride will be closed due to flooding. I don’t like having to ride in the streets and roads but with the trails closed I don’t have much choice.

Even if it were to stop raining long enough to sneak in a short ride it would be a wet one with all the standing water on the streets and trails. I have a full set of fenders but they are limited in how much good they do. They don’t stop all of the water and crud from being flung up onto me.

It is so sad that Adam and Eve blew it committing sin (rebellion against God). After they sinned a curse came upon the earth and mankind. Prior to this there was no such thing as rain and flooding. God watered the earth with a dew on the ground thru the night. Wouldn’t that be nice? Yes, if only man would not have sinned things would sure be a lot different. Of course, we will never know. And it is unfair to put all the blame on Adam and Eve. We would have done the same thing. As to the reality of things, they were absolutely pure prior to that. Adam chose to disobey and BECAME a sinner. You and I can’t make any such claim. We were born sinners and therefore we  are at enmity with God Who is Holy and Pure. Being holy and pure He can not allow us into His presence as we are unholy and impure. That is the problem we have and what keeps us separated from our Creator Who loves us and wants us to be in a relationship with Him. We have a serious problem that only God can fix. And He did fix it. He did His part. Now the ball is in our court. You can read all about it HERE. Oh how He loves you and me!

Rain rain go away, Come again another day. I want to …

There is a beautiful Christian song entitled “It won’t rain always” which I was just listening to. Of course, it has spiritual application but as I listened to it I could not help but think about its application to the weather we have been having and its effect on riding. We have been stuck in a pattern of daily rain and thunderstorms. Fortunately there have been breaks in it and I have been able to get a ride in most days. Never the less I can’t help but wonder what’s going on here … when is this going to end? 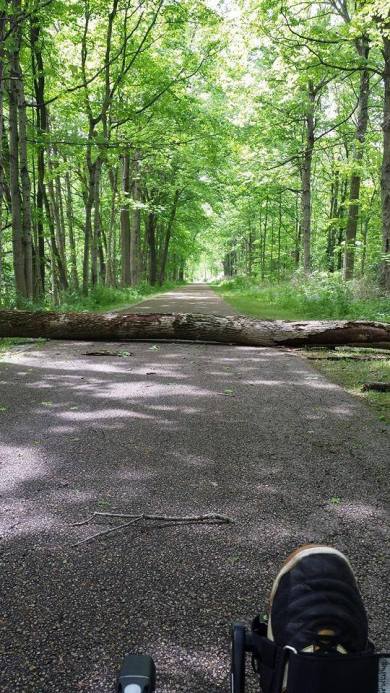 Along with all the rain we have had some pretty strong winds which, of course, have brought down trees and tree limbs on some of our trails making it impossible to ride on them until they are removed. Fortunately the city has done a pretty good job of removing them already which is very unusual for them to do so this quickly. 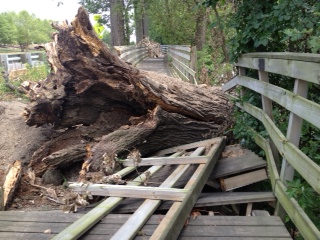 Looking at the extended weather forecast I see that the rain has ended for  a few days. Hooray!

It definitely is unusual to have much rain at this time of year. August is normally very dry and the grass stops growing, turns yellow or brown and we get a break from mowing. That is not the case this year. It has been rather hard to keep up with mowing because of the rain causing it to grow and keeping it wet so we can’t mow.

Yep, there is no rain in the forecast today so it is looking good for me to …