I came across a video where all the different models of Catrike tadpole trikes are shown and described. I was impressed with it so I thought I would share it here. Please be aware that since this video was produced Catrike has come out with two more models, the 550 and the Dumont.

This blog is about tadpole trikes and I pretty much try to stick to that. However, every once in awhile I come across something that impresses me and gets my attention. So without further ado I present to you the reader a delta trike. It is still a recumbent trike. It is a bit unusual which you shall soon see. Meet the COMFORIDER TRIKE.

Remember all images in WordPress blogs can be clicked on to open in their own window. Oftentimes they will be
displayed much larger so you can better see them. When done just use your browser’s back button to return to this page.

As you can readily see it is not a low rider. Here is what the manufacturer says about this trike on their WEBSITE:

Unlike any other existing model, this tricycle has several features that make it more versatile, more comfortable to drive, and incredibly easy to store and transport.

This trike can be set up in various configurations including a velomobile.

And there are various options available: 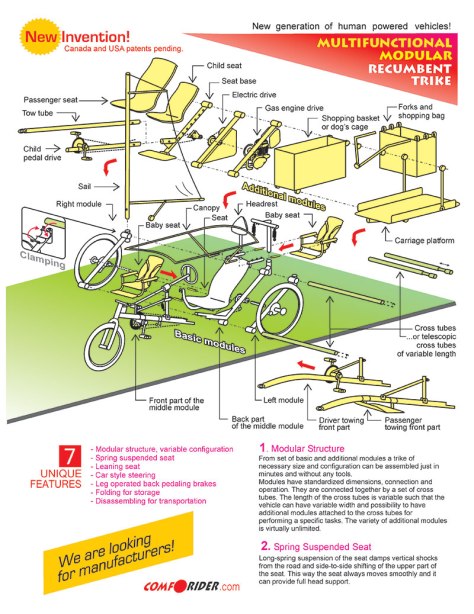 As stated this trike folds as well as disassembles for transporting and storage purposes. The first step is to remove the seat which is suspended on springs on the back side. 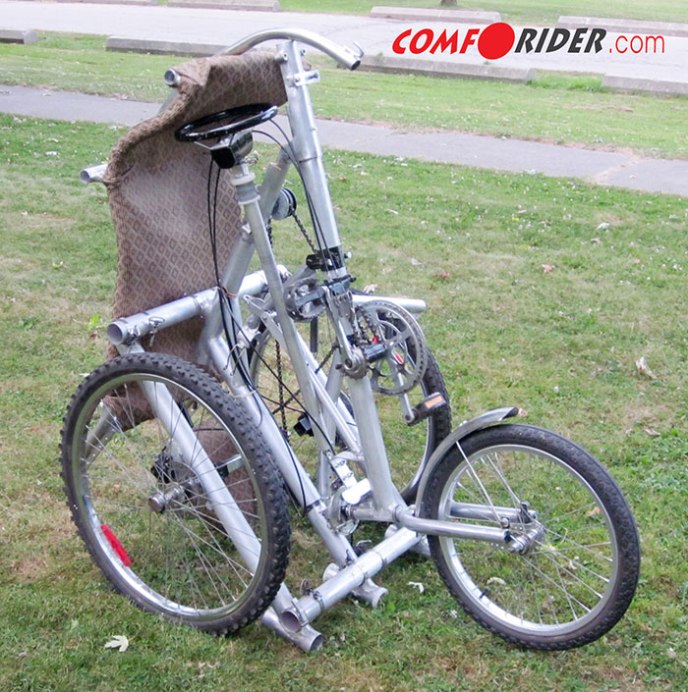 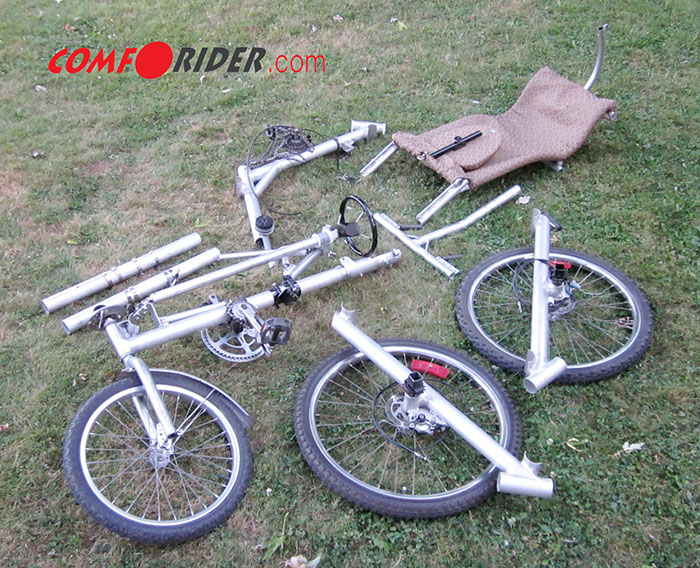 The trike has a single rear driving wheel, back pedaling brakes and automotive style steering. Here are some images showing this:

They have some videos of this trike available:

They even have a couple of motorized versions shown on their WEBSITE.

I assume that the engine is a 4 stroke and not 2 stroke, but they don’t specify. Here is an electric motor version: 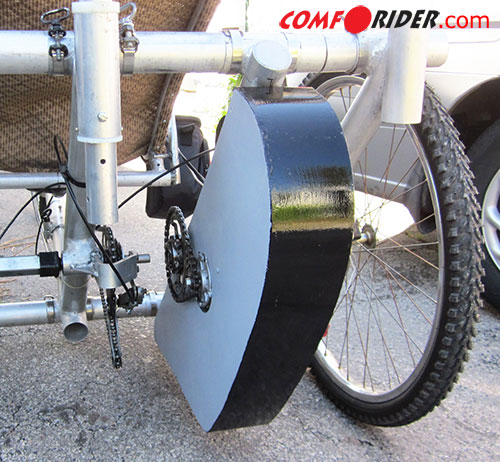 You can check out some of their options HERE. And HERE you can check out a lot of details about the trike. Here are a couple of samples of what can be found on their detail page.

The Comforider is not a tadpole trike. It is not a low rider. It is a recumbent. And it does look like it would be a comfortable ride. It may be somebody’s “cup of tea”. (For the benefit of those reading this who are not Americans and don’t understand what I just said the term “cup of tea” means “what someone likes or is interested in”.)

Folding trikes have been around for a number of years and most certainly there is a need for them as not everyone has a means of hauling a trike which doesn’t fold to a smaller size. I have to admit there are times I wish my trike folded as I would love to be able to haul it in our car instead of having to drive the pickup truck. As a weldor/fabricator I have my thoughts and concerns about folding trikes. Don’t get me wrong. I like the idea … the concept, but having the frame fold creates areas where there is a chance of problems developing. When it comes to trike frame design Catrike’s “space frame” most impresses me among all the trikes out there. It is all one piece making it super strong and practical. There is nothing to move allowing inefficiency, or to make noise from movement or to come loose or to wear. It is simply the best way of designing a trike frame hands down. When you start adding in anything which takes away from this problems follow. Hinged seat backs, removable seats, seats that adjust forward and backward (or any other direction), suspension, etc. all invite various problems to develop. One thing that almost always occurs is the generation of annoying embarrassing frustrating noises. And that is just on a non folding trike. Adding hinges in the frame so that it can fold can quite possibly bring on some of these things I just mentioned. That is the way I see it.

That being said, still the concept of a trike which folds is appealing. Until fairly recently folding trikes required that the seat be removed in order to fold it. Some even involved removing wheels. I don’t claim to be an expert on folding trikes (or even on trikes for that matter), but to the best of my knowledge and understanding there are at least 3 (well almost 3) manufacturers now offering models which fold without having to remove the seat. I am for that as it is quite practical. Again, in my opinion, having to remove seats and wheels is a real pain. The 3 trikes I speak of are: Evolve, Catrike Trail, and HP Velotechnik Gekko. Catrike announced that the Trail Folder was coming out this year, but I haven’t heard (read) anything more about it since it was first made known so I don’t know what is going on. The last thing I saw was that it is coming out sometime this Spring. Well, Spring is pretty well over and Summer is almost here (5 more days)  … and still no Trail Folder has emerged. Here are images and videos of these 3 trikes: 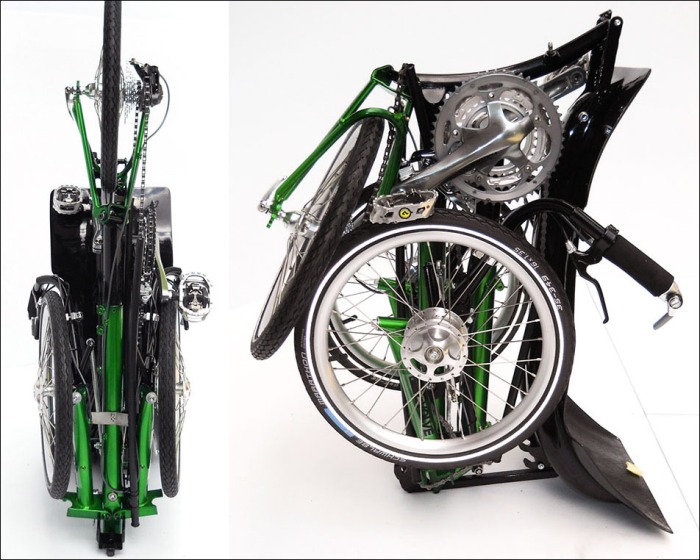 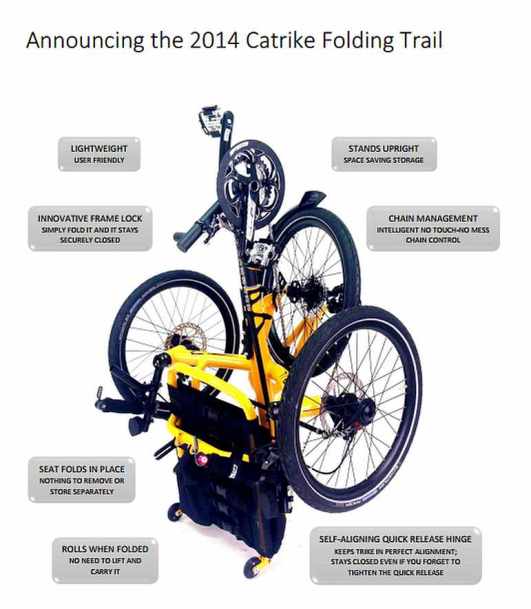 Catrike has finally started selling these and they sell for $2750.

sorry, no videos of the Catrike Trail Folder available at the time of the writing of this article

If I were looking into a folding trike to buy I don’t think I would consider any other trike but one of these … for the reason I stated … practical simplicity. We are talking about just a few seconds time to fold and unfold these trikes vs. several minutes with those where the seat has to be removed and put back on. Just removing and reinstalling the seat would be too challenging for some riders, especially if they have physical limitations making it difficult or impossible to get down and work under the trike to reinstall the seat. Some seats are not all that easy to reinstall compared to others. For anyone who is mechanically challenged this could be a serious matter. And dealing with removal and reinstalling wheels … forget it (I say). For me personally I think I would go with Catrike as their design just looks the best to me. The Evolve has its seat “on the ground” when folded and that concerns me. Both the Gekko and the Catrike Trail Folder have small wheels on the back of the seat frame so their seats don’t sit on the ground at all. Of course, the main purpose of these wheels is to allow it to be moved about without having to lift it. I like that idea … especially as I get older.

I mentioned the seat sitting on the ground being a concern. Another concern is the seat frame. Folding and unfolding a trike frame can result in messing up the physical appearance of the frame when it gets “abrasions” from the ground. I have seen it happen very quickly on a brand new folding trike. It is a shame to see this damage occur. To my way of thinking thought needs to be given to such things when the folding trike is designed and built as this should not happen. Of course, it is up to the individual person as to what measures they take or don’t take to help protect the trike during the folding and unfolding process. My point is that some designs are more difficult to deal with and prevent this from happening.

Anyway, here are some other models which fold. This may not be a complete list of such trikes but it will give you an idea of what is available. And to the best of my knowledge every one of these require that the seat be removed in order to fold it. 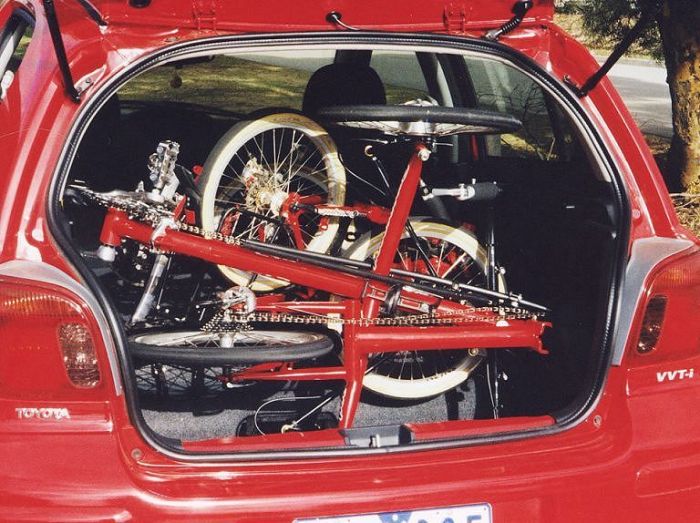 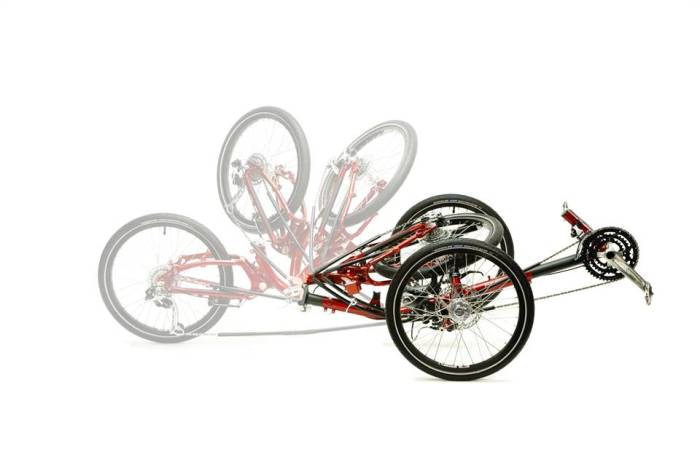 Whenever complexity enters the design and construction the result will be an increase in cost. So if we want a folding trike we will pay extra for it. Of course, hauling a trike in a car that gets 40 plus mpg vs. hauling it in a truck that gets 15 plus mpg one could recoup the difference in cost rather quickly I would think … especially at today’s gas prices. Of course, if you can ride back and forth from home rather than haul your trike you can save a whole lot of money. And just think of all the extra exercise you’ll get!

Whether you fold or don’t fold,