I remember when I first heard about “taking the lane”. It made me cringe. My thought was “You have got to be kidding. That is insane!” There was no way I would consider doing it. But I kept hearing  other cyclists talking about it and suggesting it. Finally I took the plunge and tried it. WOW! What a difference it made. Now I do it all the time. I have to admit that I would not do it everywhere if I have a choice as some roads are just too busy and dangerous.

One thing I will say is that it is important to take the lane when you are taking the lane. Some cyclists still ride over to the far right of the lane and by doing so motorists often don’t move over to another lane. They pass by the cyclist all too closely sharing the same lane.  I always ride either in the middle  (B) or even left of center (A) of the lane which forces motorists to pass me using the other lane. I think the very center is best. Riding in B some motorists will still try to  share the lane and pass by all too closely on your right side.

Another factor involving lane position is that riding on the right side of a traffic lane makes it harder for motorists to see you. When I ride on streets taking the lane I am sure to turn on more of my blinking taillights, especially my brightest ones.  I also usually have one taillight on which is set on steady on … not flashing. I always have my high visibility safety flags flying and flapping attracting attention.

Lastly, here are some other websites with useful information on them.

My final words on this … according to what others report motorists behavior and attitudes are not the same everywhere. Where I live and ride I have no issues with motorists. They are respectful and patient. Rarely does anyone honk or yell in anger. Some trikers who live and ride elsewhere report serious issues with motorists. They have bad attitudes and can get quite aggressive and ugly. If that were what I would be up against I would probably have to make some changes and do things differently. The important thing is for all of us to be safe out there.

I have had several different headlights and taillights over the years. I have liked all of them except one. I have always had what I considered bright and effective lights as far as “being seen” … which, of course, is what it is all about. This year I have had a new friend who bought a tadpole trike and we ride together sometimes. I could not help but notice his lights as they are quite bright … brighter than mine and I always thought my headlight was pretty bright and attention getting on flash mode. When I asked him about them he told me how cheap they are. I have been using lights which take AAA batteries. They are excellent lights and I am continuing to use them as back up. These lights my friend have are USB rechargeable. The light I had which I didn’t like was USB rechargeable and the battery didn’t last nearly long enough for my daily rides so I stopped using it. It was super bright for riding at night but it had a pulse mode instead of a flash mode. The pulse mode was about worthless. I ended up throwing the light away recently as it stopped working … would no longer turn on at all. It was the most expensive headlight I have ever bought so I was not a happy camper nor was I impressed with its failure which happened all too soon. Anyway that is past history now. I bought two sets of these lights like my friend has. They are amazingly cheap … only $12.99 for the set on Amazon. They have a one year warranty which the company is quick to honor.

As you can see the taillight is rather small but don’t let that fool you. That thing is very bright. The headlight is 300 lumen which is not an extremely powerful light for night riding but in my opinion one doesn’t need anything more than this in the daytime. It has excellent lens optics so it is super bright. I have found that the lens optics in lights make all the difference. One can have more light from 300 lumens with high quality lens optics than another light with 1000 lumens has with poor quality lens optics. I wish I could demonstrate this light set to you as I am sure you would agree and be very impressed.

For those in need of lights I recommend these. They get the job done and one certainly can’t complain about the price. For daytime riding they are superb … like I said … they are all that is needed. I don’t ride at night normally so I can’t comment about how well the headlight is for night time riding. Certainly with only 1.5 hours battery life on full steady on power mode it isn’t going to be a very long ride. Hey, at only $12.99 get at least two sets and have twice the brightness out there for night riding.

Here is what is shown on Amazon about this light set:

Note … since I wrote this article I bought another USB rechargable headlight which was suppose to 1000 lumen and also a free taillight. The price was just slightly more than these others I wrote about above. When I received it the literature which came with it said that the light was only 450 lumen and there was no taillight shipped along with it. So now I am waiting for the seller to do whatever he is going to do. So far he hasn’t done much of anything. I ordered this new light because it has a diffuser lens which helps keep the light from shining up high and blinding people. It appears to be a well made headlight. I just hope they get this all straightened out. I am happy enough with the 450 lumen but if that is what they are sending out they need to change the ad since it clearly states 1000 lumen. 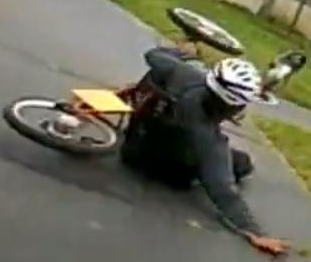 Now I ask ‘ya … what could possibly go wrong when we are out riding? I mean we are on 3 wheels and low to the ground so we are safe, right? Whoa! Slow up there! You better think again. There are all sorts of things that can go wrong. I feel relatively safe while riding my trike, but I also know that there are elements of danger and concern. Tipping over is just one of those things. I have been fortunate in that I have never been seriously injured in any tip over I have been involved in. I know others who can’t say that. They received painful injuries which took awhile to recover from.

Leaning into a turn can help immensely to avoid tipping over. Otherwise we need to slow down more as tadpole trikes can and do tip over. And if you ride a trike with a high seat (such as TerraTrike Rover & Rambler, ICE Adventure, Trident Spike & Titan, etc.) they can tip over more readily than trikes with lower seats. Also if you are carrying weight up high on a trike (such as on a rear rack) that raises the center of gravity and the trike can tip over easier. BTW, all TerraTrike models have high seats so none of them are as stable as trikes that have lower seats. Just looking at various makes and models of trikes I have noticed that the trend seems to be higher seats on most models nowadays. I am used to sitting 9 inches or so off of the ground. Very few models nowadays still offer that seat height. That’s all the more reason to stick with what I have as higher seats just don’t appeal to me … at least not as long as I am capable of getting in and out of a lower seat. And I figure it helps keep me young. 🙂 I like having a good handling trike. I have a friend I ride with who has a TT Rambler. He has to slow way up to corner for fear of tipping over. That’s not for me. That would take a lot of fun out of riding a tadpole trike. 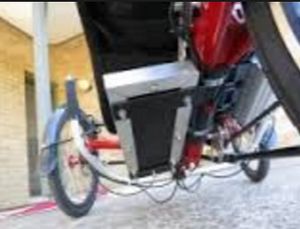 Drooping cables and such hanging down low under a trike can be quite hazardous resulting in messing up one’s day. They can easily catch on something and not only destroy the cable or wire (or more), but it could cause the trike to wreck. 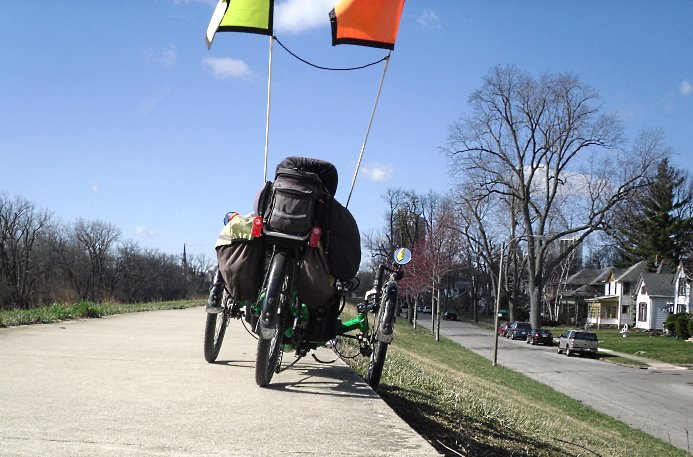 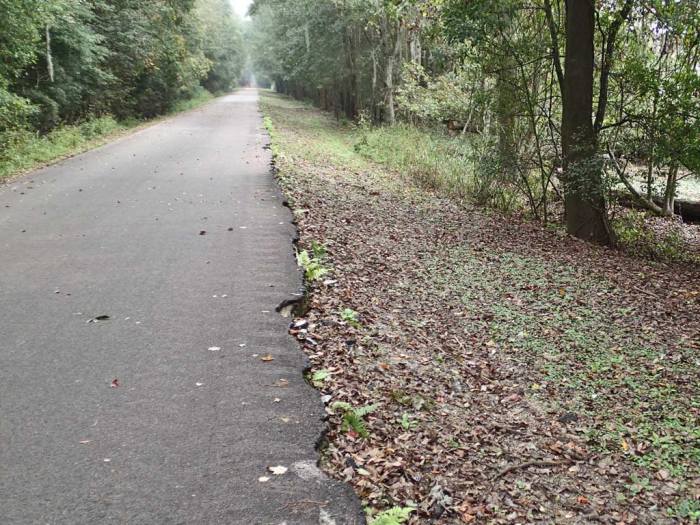 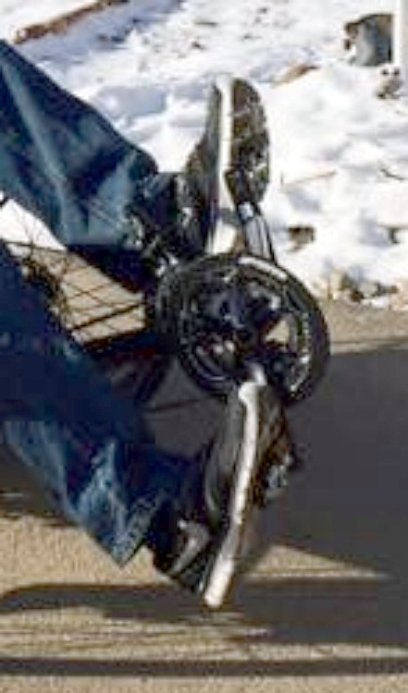 With the rider’s feet just a short distance off of the ground and out in front it is all too easy for the feet to slip off of the pedals and hit the ground resulting in leg suck … when the foot and leg get ran over by the trike and bent back under the cruciform (frame cross member) … resulting in painful injury. That is why it is so highly recommended to employ some means of keeping your feet secured to the pedals. 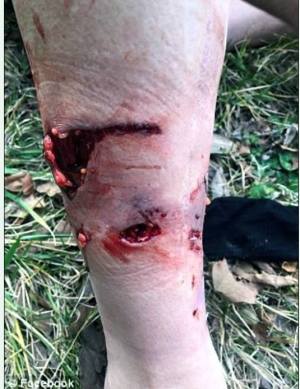 Dogs allowed to run loose and not under control can really mess up your day. This person was a victim of a dog chomping down on his leg. So much for being man’s best friend.

Various obstacles in our paths can mess up our day if we fail to see and avoid them. Whether it is a bollard, a handrail or something else running into it can be bad news. 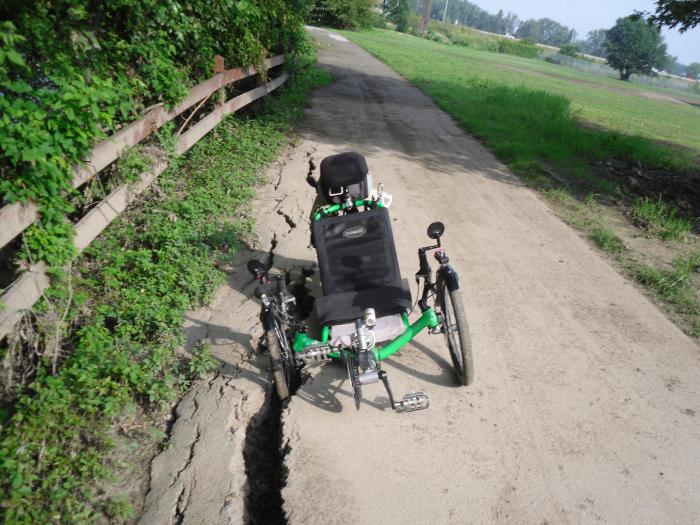 And coming onto damaged pavement like pictured above could readily mess up your day. One of the great attributes of our trike riding is being able to take in the scenery better than we could when we rode bicycles. However, we still need to be careful and watch where we are going.

Some places are just more hazardous to ride than others so we need to really watch out for ourselves.

We need to expect the unexpected at all times. Accidents most often happen by accident. We should not do those things which could be used to say we gave them a lot of help. 🙂 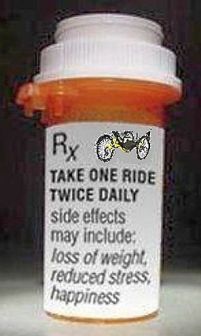 Lastly, failure to follow sound advice can have negative results. Be safe out there & …