I remember when I first heard about “taking the lane”. It made me cringe. My thought was “You have got to be kidding. That is insane!” There was no way I would consider doing it. But I kept hearing  other cyclists talking about it and suggesting it. Finally I took the plunge and tried it. WOW! What a difference it made. Now I do it all the time. I have to admit that I would not do it everywhere if I have a choice as some roads are just too busy and dangerous. 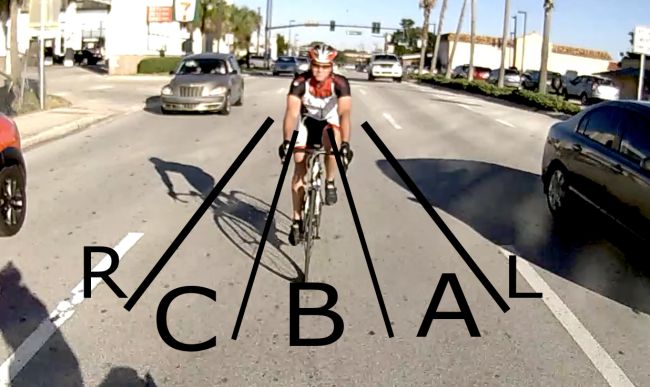 One thing I will say is that it is important to take the lane when you are taking the lane. Some cyclists still ride over to the far right of the lane and by doing so motorists often don’t move over to another lane. They pass by the cyclist all too closely sharing the same lane.  I always ride either in the middle  (B) or even left of center (A) of the lane which forces motorists to pass me using the other lane. I think the very center is best. Riding in B some motorists will still try to  share the lane and pass by all too closely on your right side.

Another factor involving lane position is that riding on the right side of a traffic lane makes it harder for motorists to see you. When I ride on streets taking the lane I am sure to turn on more of my blinking taillights, especially my brightest ones.  I also usually have one taillight on which is set on steady on … not flashing. I always have my high visibility safety flags flying and flapping attracting attention.

Lastly, here are some other websites with useful information on them.

My final words on this … according to what others report motorists behavior and attitudes are not the same everywhere. Where I live and ride I have no issues with motorists. They are respectful and patient. Rarely does anyone honk or yell in anger. Some trikers who live and ride elsewhere report serious issues with motorists. They have bad attitudes and can get quite aggressive and ugly. If that were what I would be up against I would probably have to make some changes and do things differently. The important thing is for all of us to be safe out there. 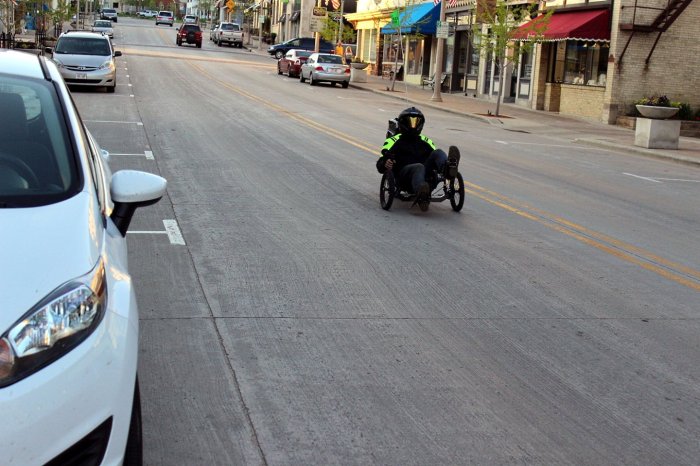 Growing up I never heard of “taking the lane”.  As a child and up thru my teen years I chose to ride on the left (wrong) side of the road against traffic. My thinking and reasoning was that I was able to see the traffic ahead of me coming at me and, if need be, I could take evasive action to keep from getting hit. I never had a policeman stop me for doing this. Later as I grew into adulthood I started riding on the right (correct) side of the road but I stayed over to the right as far as possible trying to stay out of the way of all traffic. BTW, now I try to avoid riding on the left (wrong) side of the road as I came to realize that doing this does present problems for motorists. It can confuse them and shake them up.

In recent years I started hearing about riding out in the lane of traffic “taking the lane”.

When I first heard it I thought it was nuts … asking for disaster. I started experimenting with riding out in the traffic lane and found that there was no problem in doing so. I got more and more comfortable with it and came to the realization that it is safer and better than riding over on the right hand side. So now I take the lane almost all the time. The exception to that is if I am riding somewhere that has a very wide lane where there is plenty of room for motor vehicles to safely pass by me . I am also leery of taking the lane of a road where there are hills and curves which would make it impossible for a motor vehicle coming up behind me to see me in time to avoid colliding with me. It is best just to stay off of roads like that as they are just too dangerous. I want to be safe out there and …

BTW, I haven’t mentioned designated bike lanes. The concept sounds good but I find them objectionable to use as they are just dangerous. Motor vehicles drive in them, park in them, cut cyclists off not paying any attention to them. Then there is the fact that a cyclist is trapped in a narrow lane between moving motor vehicles and parked motor vehicles. The parked motor vehicles pose a real threat as doors are opened just as the cyclist is riding by. Also the parked vehicles start pulling out often not paying any attention if cyclists are riding along coming up to them. I have also noticed that the surface of bike lanes is usually the worst part of the street as far as the surface. There are lots of manhole covers, pot holes, debris, etc. to contend with. It is difficult and dangerous trying to move about to avoid it.