Tadpole trikes are not made for climbing walls. A friend of mine found out the hard way. I don’t have any pictures of his accident as he was by himself at the time. Since I wasn’t there I didn’t see it happen, but I would guess that it was either a matter of going too fast or not paying enough attention. Either way the result was the same. He was turning a sharp 90 degree corner in this boardwalk (illustrated by yellow arrow in the second picture below). The first picture shows the trail as it goes along and to this boardwalk. The yellow X shows where the accident happened.

This section of the trail incorporates a zigzag boardwalk which connects the trail at street level to the trail down below … a matter of about 30 feet or more in height difference. You can see this in the video below. 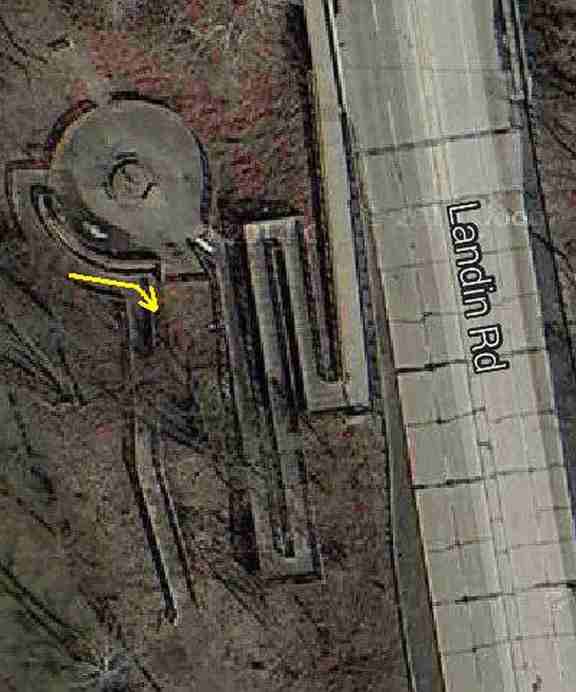 Here is a video I made several years ago showing the view of this area as I ride down this boardwalk ramp. I was riding my homemade tadpole trike I had at that time. I apologize for the rather poor quality of the video. It has been cloned a couple of times at least and lost some quality with each copy (much like what happened in the movie, Mulitiplicity. Also I made the mistake of allowing YouTube to “stabilize” it which only made it worse. This boardwalk starts at about the 2:35 minute mark and the wreck occurred at about the 3:48 mark. By the way, this same friend had another wreck when he ran into the sides of another boardwalk which is also shown in the video at about the 6:38 mark. He was coming the opposite direction I am going in the video and was “hot dogging”. He broke his ankle in that accident. That was within a couple of weeks or so of buying his first tadpole trike.

As my friend made the turn his left front tire got into the wooden fence and climbed up the “wall” until he tipped over. It flipped him over hard and fast and he landed on his shoulder and back and got injured somewhat. It was sore for quite awhile.

Anybody who has followed my writings knows that I have said more than once that a trike is a blast to ride and relatively safe and stable. However, they will tip over and it doesn’t take much to get into trouble quickly. Once a trike starts going over it is difficult to recover from it.

I took my trike to the place where it happened and positioned it so it looked like it was climbing the fence … in an attempt to sort of illustrate what happened. I could not duplicate it since I was by myself and had nobody to help either hold the trike in position or take the pictures for me. Here are some of the pictures I took. 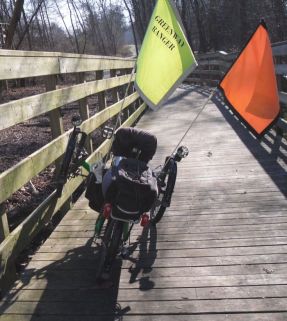 I think you can see that it would not take much for the trike to tip over, especially when the rider’s weight is suddenly shifted to the right as the trike gets into the wall and starts tipping.

By the way, if you have not yet discovered it these wooden boardwalks can be extremely slippery when wet and very dangerous.

Anyway, be careful when riding near fences and walls as this could happen to you. We all want to …