I need to further clarify things as a tadpole trike may or may not be a recumbent trike. Recumbent means reclined. Being truly recumbent means that one is in the prone position (laying down flat). In today’s society it has become accepted that simply having one’s feet out in front of them is recumbent. I take issue with that but of no avail. I think if the seating position is not recumbent it should not be referred to as recumbent. “feet or pedals forward” would be a better and more accurate description.

There are tricycles which have two wheels in front and one rear wheel but they are just like a regular bicycle otherwise … with the pedals down below the seat and the seat is usually just a standard bicycle seat. They are a tadpole trike but they are not recumbent. 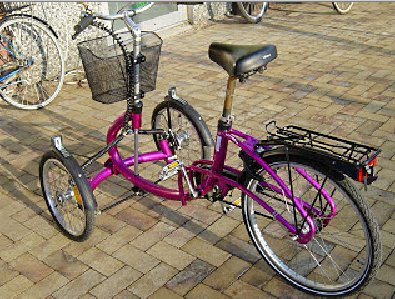 Now that I have covered that let’s move onto how the name changed from reverse trike to tadpole. What do you think of when you hear the word “tadpole”? My first exposure to the critter was as a young child and I learned that a tadpole was a stage of an amphibian developing into what we know as a frog. Legs slowly develop and eventually the tail is lost. Hey, here is one now …

I always thought that calling a tadpole trike by that name was interesting. To me the resemblence is very vague, but obviously the name caught on. And obviously the fact that a tadpole has a wider front end than it has a backend is why this name was thought up.

I made up this image years ago. I know that the color of the tadpole I am sitting on is not the usual color of a tadpole, but my Catrike Trail is green and most of the background is green so if I would have made the tadpole green it would have been much more difficult to see.

Still it seems funny to go around saying that we ride a tadpole trike. I guess no matter which we called it … tadpole or reverse trike … we would end up having to explain what we are talking about. I have no answer to it.

I reckon that is why I have a picture of my trike as “wallpaper” on my smartphone … so I can just show a picture of my trike making it easier for others to know and understand what I am talking about when I say that I ride a tadpole trike. (A picture is worth a thousand words.) Anyway, if you see me going in reverse just maybe I will be trying to explain to someone what I am riding.

One thought on “REVERSE TRIKES”