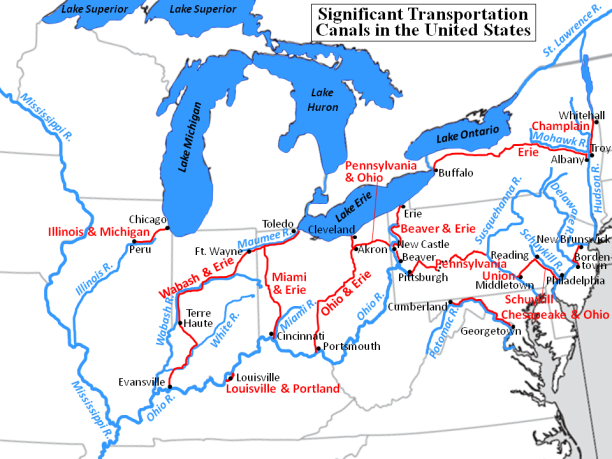 Long before you and I were born there existed transportation canals. They were man made. Most of them are gone now but some of our bike trails have been built along some of them. Here where I live in Fort Wayne, Indiana the Wabash-Erie Canal passed thru. 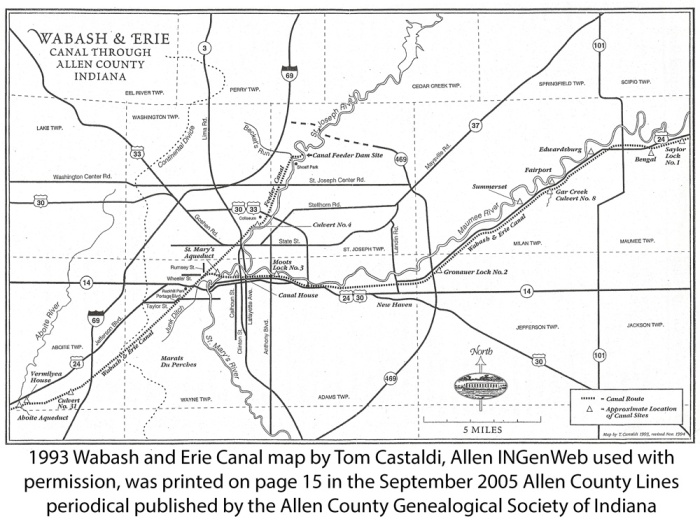 We have at least 4 local trails that go along the paths of these canals. If I had not researched a little bit about this canal I would have remained totally ignorant of it. The Wabash-Erie Canal pretty much followed along near the Maumee River from Lake Erie near Toledo, Ohio  to Fort Wayne. From Fort Wayne it continued on southwest to the Wabash River and followed it southward until it headed back southeast to the White River. It ended at the Ohio River at Evansville, Indiana for a total distance of 497 miles. Perhaps you noticed that the sign shows the canal as being only 468 miles long instead of the 497 I stated above. I don’t know which is correct, but 497 is what I read online. On the map far above you can see the several canals that used to exist. The picture below shows a typical canal boat used on the canals. They were drawn by a team of horses or mules from the shore alongside of the canals. Those paths were called “towpaths”. There are some modern day trails  which have “Towpath” in their name. We have one right here in Fort Wayne. 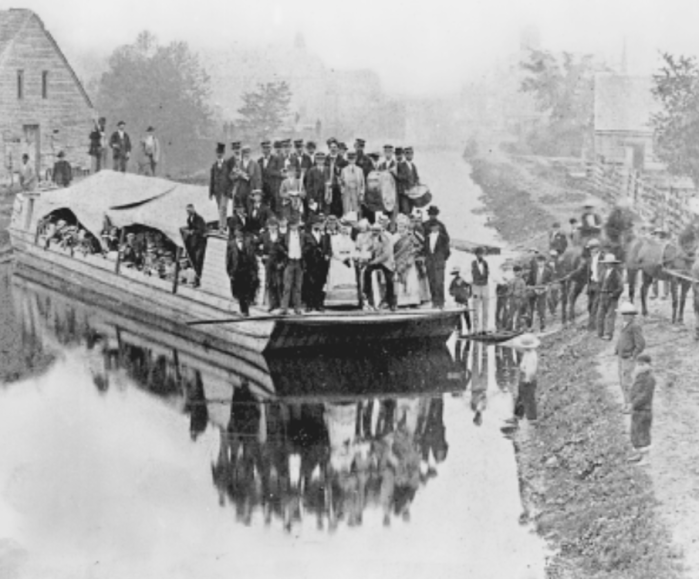 The canal was abandoned in 1874, sold in 1877, and its path through Fort Wayne sold in 1881 to the Nickel Plate Railroad for its roadbed. The last boat was seen on the canal in 1882. Historical Society Marker 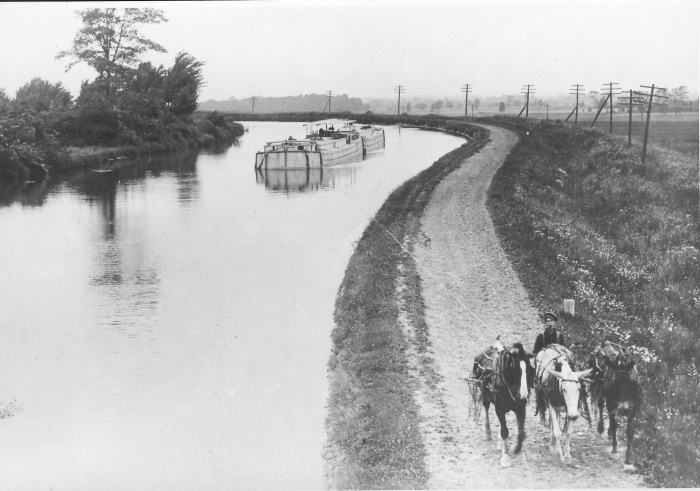 I read that these draft animals can pull 50 times more weight on a boat in water than they could if it were on  a wagon on land. 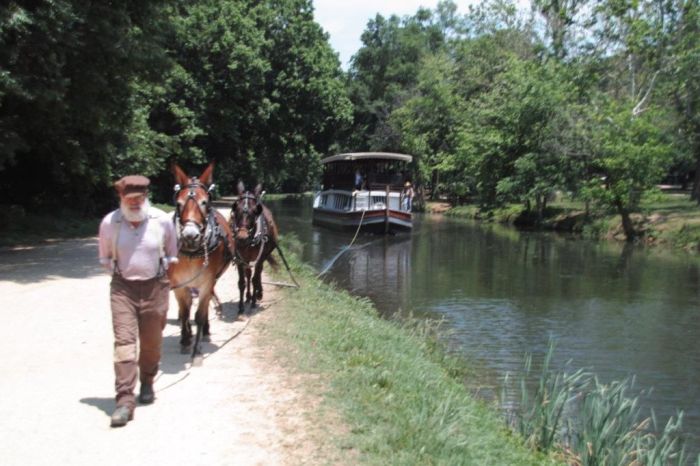 Along the Towpath Trail there are still some remains of the canal. I have ridden past there hundreds of times and never realized  this. Just yesteday I found out about it.

For what it is worth right after I composed this article I rode the Towpath Trail again looking for signs of a former canal. I stopped and got off of my trike and walked over to the area shown circled, but I saw no sign of a canal ever being there.

From the St. Joseph River a “feeder canal” was built taking water from the St. Joe River down into downtown Ft. Wayne to provide additional water to the Wabash-Erie Canal. The St. Joseph Pathway and Becketts Run Trail  follow alongside of it in places. I have seen sections of this feeder canal as it is quite obvious.

In the picture above the red line indicates the Saint Joseph Pathway as it passes thru Purdue University property. The yellow line indicates the feeder canal. It runs in a straight line all the way up to where it connected to the St. Joe River further up north of Becketts Run Trail in what used to be called Robinson Park. It is all gone today as it has been made into a housing subdivision. The blue line indicates the west bank of the St. Joe River. The picture below is of the same area. You can see the water filled canal running alongside of the bike trail.

Here is a sign concerning the feeder canal along Becketts Run Trail. 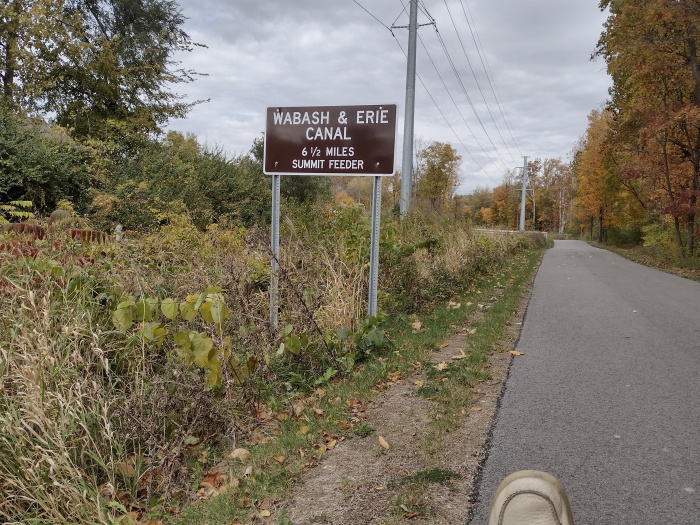 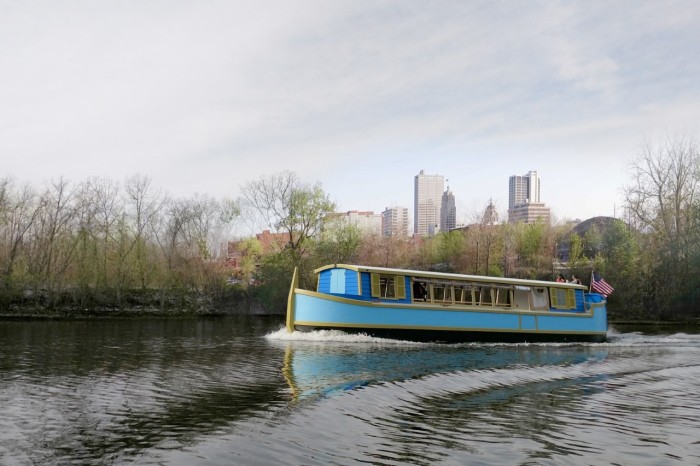 This is a modern day replica of a canal boat. This one is made of aluminum and is used to offer rides to those wanting to take a river cruise aboard it here in Fort Wayne. There is a monetary charge for it. It operates mainly on the Saint Marys River and it docks downtown at Prominade Park.

I find it interesting that the Towpath Trail is named after the towing path alongside the canal used by the horses and mules to pull the canal boats, but there is nothing to see as you ride the trail. If there was a canal out there with banks alongside the horses and mules walked on I sure don’t know where it is and I have ridden it hundreds of times. I have often wondered about it. If anything is there to see I am not aware of it. The next time I ride out on the Towpath Trail I am going to look harder to see if anything is there.

I posted an article awhile back about a tadpole trike ride along the Erie Canal. There are several YouTube videos documenting the ride and the remains of the canal.

I contacted a key person with our trails asking if any map is available that shows the former route of the canal and our trails. I was told that none exist but another person came up with a map in a .pdf file format which I have been unsuccessful in posting here. However, I saved it as a .jpg format which I can post here.

If you live near so that you can get to ride near any of these old canals used to exist you might want to check them out to see what remains of them.

One thought on “CANAL ROUTES”